Wiener schnitzel is in fact “Milanese cutlet”. But how did Italians get this recipe?

In the Middle Ages, the Italians looked upon their neighbors in Byzantium (the later Constantinople, now Istanbul) with envy. In Constantinople people were coating meat with gold leaves in order to flaunt their wealth. The Italians copied this, but the church expressed her revolt against such wastefulness, so the gold coating became a shell of golden brown fried white breadcrumbs.

In 1848, Graf Radetzky, the Austrian field marshal and military reformer, raved about the “golden” delicacy in a military report at the court. Interestingly, before the breaded schnitzel could really gain foothold in Vienna, it became popular at peasant weddings in the Weinviertel (the wine region) as a “golden schnitzel”. Since then the Viennese cooks continue to occupy themselves with the Italian recipe and refined it: in place of cutlet, the more succulent veal was thinly sliced, the white breadcrumbs were replaced by Austrian breadcrumbs, and the flour that was much-loved in Viennese cuisine was added as the basis for the highly sticky coating. 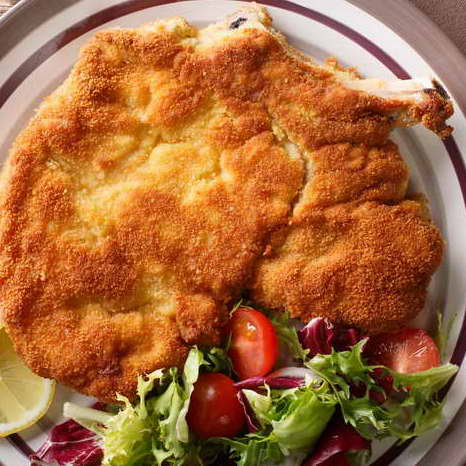